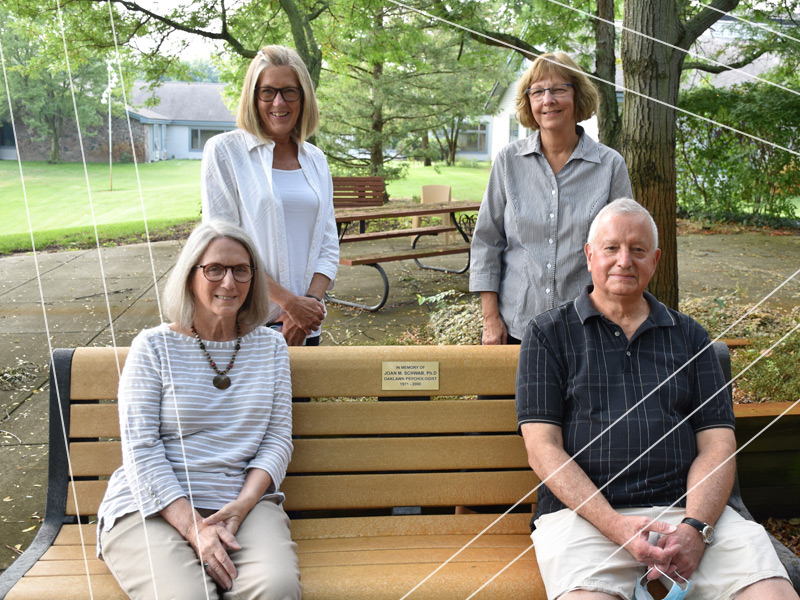 “She was a consummate professional and modeled how the younger ones coming on board could demonstrate that kind of professionalism and internalize it along the way. She was a terrific mentor.”

It’s been nearly 50 years since Mary Mishler first met Dr. Joan Schwab. She recounts the moment – a seemingly crystal clear memory that stands apart from a lifetime of others that swirl together.

“Her first day that she came to Oaklawn to see about a job, we were all in the lunch line when they came through, she and Walter Drudge,” Mishler said. “She was very plain, her dress and her hair. We were wondering what kind of person she would be. Her smile won her way. We soon learned to love her. She was so, so helpful to everybody.”

The year was 1971. The Soviet Union launched the first international space station; Disney World opened in Orlando, Florida, and The New York Times published a series of classified documents called The Pentagon Papers. It was eight years after Oaklawn Psychiatric Center welcomed its first patient and three years after becoming the Community Mental Health Center for Elkhart County. Employee ID numbers were issued chronologically, and Joan’s was 26.

The Road to Oaklawn

She grew up in Silver Springs, Md., a suburb of Washington, D.C. She graduated from Trinity Washington University in 1957 with a degree in history. At that time, it was called Trinity College and was exclusively for women, mostly from wealthy families, which Joan was not.

“She was tired of being poor, so went looking for a job and got a job as a management trainee in the Navy Department,” Joe said. “They were in the early stages of using computers.”

She met and married her first husband and they had four children. He was a Ph.D. in laser physics and had moved the family to South Bend to join the faculty at University of Notre Dame. But life changed for the couple when he became fascinated with the theories of Timothy Leary regarding the use of LSD and the Free Love movement of the ’60s.

“So with four kids, Joan divorced [her first husband] – that’s the toughness – and she went to Notre Dame,” Joe said.

It was there Joe and Joan met as doctoral students in the psychology department in 1968. They were paired together for a group project working in South Bend schools. When they graduated in 1974, they were the first husband-wife team to graduate from Notre Dame with a Ph.D. at the same time on the same day.

When Joan started at Oaklawn in 1971, there were satellite offices in the community where outpatient clinical work was conducted. Joan became director of the Middlebury office and also provided some clinical testing and staffing for the day hospital.

That’s how Mim Weaver got to know her.

Mim was a nurse who started at Oaklawn before the building even opened.

“I was washing the windows and cleaning up all the dirt” when construction finished, she remembers.

Mim had worked at Brooke Lane, one of the earliest Mennonite mental health hospitals to open, but she came to Oaklawn because of its cutting-edge treatment model.

“What I liked about the whole program was we didn’t just diagnose somebody, but we worked at helping them live a better life, to help them learn new ways of coping with things and that was what was really great,” she said.

When Mim transferred to the outpatient department and started leading psychoeducation groups, Joan was her supervisor.

“She taught me a lot. Everybody that knew her respected her work. She was good,” Mim said.

That was the same sentiment from fellow clinician John Hershberger, who worked with Joan for nearly 20 years. By the time John started at Oaklawn in 1981, Joan was clinical team leader for the adult outpatient team.

“She was a consummate professional and modeled how the younger ones coming on board could demonstrate that kind of professionalism and internalize it along the way,” John said. “She was a terrific mentor.

“I remember going to staffings [with her], and she was my supervisor for a period of time, also. I prepared for those events. If I wasn’t prepared, I was going to be embarrassed, not because of her interpersonal style, but because it would be evident to both of us that I either didn’t know what I was doing or had failed to investigate something. It was a heightened expectation, and I learned so much.”

John remembers Joan as a credit to the profession. Psychology has seen its share of fad interventions and self-seeking practitioners. By contrast, Joan was careful, precise and well-grounded. Further, she was incredibly talented, he said. If someone was stuck on a case, Joan would perform testing and a clinical interview, and produce a report that described what was occurring and a path forward.

“Sadly, it’s kind of a lost art,” he said. But with Joan, “you always knew you had that kind of backup.”

She was instrumental in developing two important programs in Oaklawn’s history, John said. One was an internship program in partnership with Notre Dame’s Counseling Psychology Program. She was director and primary supervisor for students, who would spend an entire academic year at Oaklawn. The second was a depression clinic that pioneered the use of Cognitive Behavioral Therapy at Oaklawn and was among the first in the region to use the model. She set high expectations that lifted not only her own clinical practice, but that of everyone around her.

“She had a kind of professional work ethic that kept her improving,” John said. “Her intellect was innate, but she worked at developing herself.”

When Oaklawn opened the Goshen hospital in 1987, Joan went to work there. According to her husband Joe, she was so well respected by the staff, she was voted chief of staff.

Unfortunately, “JCAHO came along and said, ‘That’s great, but it has to be a physician.’ But by a pure quality vote, she was voted chief of staff, and she said that was the accomplishment she was most proud of.

“Every time Joan talked about Oaklawn, it was positive. That’s the tender part of her,” he said. “She loved the place.”

After the Schwabs retired in 2000, they moved to Arizona – travelling often to see their five children (Joe and Joan had another child after their marriage). They stayed close with some old friends from Oaklawn. Eventually, after some health problems, the couple settled down in Wilsonville, Oregon, just a few miles from their son.

In 2013, Joan began showing early signs of dementia, which was followed by Parkinson’s. It was difficult to watch the woman he loved, who by Joe’s account was far brighter than him, forget such important things as their anniversary or even his name. Joe was her faithful caregiver until her death in 2018.

Now, he wants to share her memory with others through a gift to the place that Joan loved. Four new benches installed on the patio off Lakeview Gardens in Goshen, overlooking the pond, are dedicated in loving memory to Joan. They are a visual reminder of the woman whose high standard of clinical practice continues to shape Oaklawn’s service today – a legacy not soon forgotten.