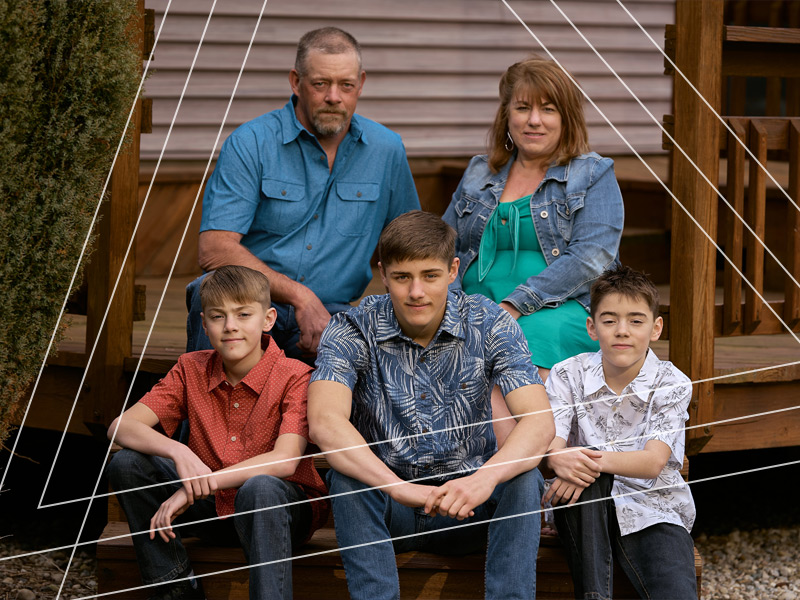 “Oaklawn set up meetings with the school, and it wasn’t just an email, it was a face-to-face … They also gave us tips for things to do at home, so then we were all working together.”

It’s a bit of a country paradise at the Simmons’ home in Goshen, with acres of land boasting fields, woods and a pond. There’s plenty to do for the three young men who live there: hunting and fishing are favorites. It’s the same land that was owned by their great-great grandfather in the 1800s and offers many quiet places to be alone and connect with nature.

Compare that with their school setting – busy atmosphere, plenty of noise and a strict schedule to keep. As early as the first grade, teachers noticed the younger boys, twins, struggled to stay focused, said Cheryll Simmons. The school suspected ADD and suggested she take them to her pediatrician. She prescribed medication – several in varying doses over the next few years – but their behavior became worse and their medication less helpful.

By the fourth grade, behavior problems were causing them to miss out at school and the Boys and Girls Clubs, which they began attending that year.

“Every three days, we’d get a call from the school saying, ‘You gotta come pick ’em up,’ ” said Ron Simmons. “Sometimes I was nearby, like Elkhart or Goshen; sometimes I’d be in Niles. It was a real problem.”

Besides interfering with their work, removing the boys from the school or club just wasn’t solving anything, said Cheryll. That’s when the club director recommended Partnership for Children. The Partnership is a collaboration between Oaklawn and 11 youth-serving agencies in Elkhart County. It aims to help identify youth who are struggling behaviorally, get them help faster and build skills to help them succeed.

They started meeting with care facilitator Linda Smith. She connected them with an Oaklawn psychiatrist, a Partnership for Children skills trainer and facilitated monthly meetings with the family, school and club.

“When we finally started taking the boys to see Dr. [Douglas] Jarvis, within a month, the difference was night and day,” said Ron.

While getting on the right medication definitely helped, the boys also received skills training, which they needed, Cheryll said. The skills trainer worked with the boys, the school, the club and the family to find ways to deal with their feelings and behaviors in a healthy way.

“Oaklawn set up meetings with the school, and it wasn’t just an email,” she said, “it was a face-to-face and made a bigger impact. They also gave us tips for things to do at home, so then we were all working together.”

Within just a few months, teachers, club leaders and Ron and Cheryll began to see changes in the boys. Their school work improved, they had new tools to handle stressful situations and they became even more involved with Boys and Girls Clubs. After about a year and a half, they successfully graduated from Partnership for Children.

“Partnership for Children is such a needed thing,” Cheryll said. “It helped get us on the right path.”